Due to overwhelming demand we are only able to accept regular quarterly grooming clients at this time. If you are looking for a once yearly groom we will not be able to groom your cat at this time. Read More

It’s Not A Dog’s World Anymore!

As a cat lover, or really as an animal lover, I have seen a huge shift in the last 20 years on how the general public views cats. They are finally getting the recognition and respect they deserve. I am seeing more publicity about cats, more services, more cat related businesses including veterinarians. I’ve always felt it was an uphill battle being a cat exclusive groomer, so I am so happy to see this shift. But let’s go back hundreds of years ago. How did it become a dog’s world anyway?  Very simple. Dogs have always been used as a service animal for humans, whether it was pulling a sled, guarding, hunting, carrying loads for travelers and much more. Cats were sort of around keeping mice at bay, but never have I heard of a cat pulling a sled. So dogs just became more useful for people. In Egypt however, cats were worshipped as gods, as they saved the wheat crops and therefore all the food sources for their society, and most likely saved generations of people. I have read where if you killed a cat in Egypt back then, you could be beheaded. They are in tombs buried with people as skeletal remains have been discovered as well as etched on walls in Egypt. But this society was a rare exception in the importance of cats in our lives 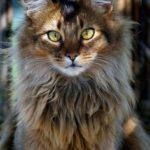 When I first started grooming cats you never heard of cat groomers. I have to admit, it was rare. But I never let that stop me. I think my love for cats overcame all the negative naysayers I ran across, thinking I was crazy that I could actually make a living at doing this. Boy, do I wish I could talk to them now.

I’ve done several cat grooming seminars, mainly to dog groomers, and they are shocked that you can make a living at cat grooming. But why not? There are now more cats in households than dogs! So it makes sense that services and products for cats would be on the rise. And have you seen all the social media attention to cats? It is fabulous.

I think if you love animals, you just naturally love all animals. Do I like apples more than oranges? No, they are just different but both are really good fruits. When I am around any type of animal it brings me such joy. I had a goat growing up named Moonbow, who rode in my car, went on a leash with me, and I never thought it was strange. Every animal has their own means of communicating with humans, their own distinct personality, their own sometimes funny, quirky behavior that makes us laugh. But I still find cats to be so very special. I call them the thinking man’s pet. They are spiritual creatures who have still yet to get the recognition they deserve. But they are on the move.

We are open by appontment only

Find us on the map